Politics of food: How can we use our kitchens and the food we cook with to bring forth change? 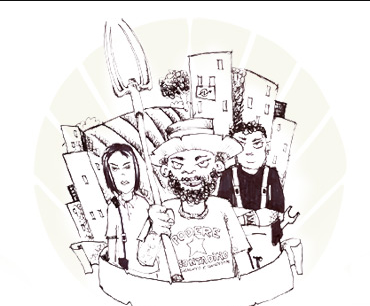 We want to express a strong and firm critique at the current standardized and industrialized food production system, harmful for everybody’s health and even worse for the communities living in the territories where this food is produced. This terrible food quality is due to the usage of chemicals and techniques based exclusively on principles of cost minimization and quantity maximization. This is also a system that wastes more than one third of what is produced. Perfectly fine fruits and vegetables fill bins everywhere around the city everyday.

However, we deem necessary overcoming a simple critique of the food production system, especially in these years where the global capitalist paradigma redefines itself around apparently ecologist instances. In the new “green economy” food gains a fundamental role, and labels like “organic” or “local” or “anti-foodwaste” are nowadays seen as economically valuable even from those businesses and governments that in the past and even now greatly contribute to devastation of lands. And for this reason then, in the case of food-waste we have been seeing a lot of business models (ads in supermarkets, fancy anti-foodwaste restaurants, anti-foodwaste apps…) coming up trying to make money out of food-waste pretending to solve the problem.
Moreover, not even the so called “organic food” is immune to heavy contradictions and power dynamics enriching the few and usual suspects. The certification system is placing the organic production in the exactly same dynamics of the usual food industry; this critique, limited as it is to the healthiness of the product, is nothing more than the rhetoric of (presumed) “quality food”  – that of course only very few “lucky” ones can afford, on the basis of the usual equation (low income :  bad food = rich people : certified organic food) – if it does not come with a firm and fundamental refusal of any logics of exploitation, logics that all these discourses on green capitalism do of course never question.

We do think that any meaningful discourse on food should start from this: the industrial food system and its production and distribution are completely centered on the wildest exploitation: of land, of water, of animals and of human labour. Making it greener won’t change the dynamics.

In many VoKus this critique is manifested in different ways, even if partially. We ourselves dumpster-dive every week, getting fruits and veggies, still perfectly fine to eat, literally out of the trash bins. This allows us to expose foodwaste, one of the most visible contradictions of this food production system (and its supposed efficiency) and at the same time to serve a free dinner with what is considered to be waste. While, by reclaiming this waste, we firmly reject the large-scale retail trade and all the exploitation it directly or indirectly perpetuates, we do recognise that this is not building complete alternatives to this food production system.

Other VoKus do the same thing we do, others use local products from small-scale farmers, others are buying most of their food from the supermarkets.
It is also necessary to confront the contradiction arising between the support that the food bought in supermarkets gives to the ipercapitalistic economy, thus the excessive power of the large scale distribution imposing woldwide new forms of slavery (from fields in the Global South to the distribution centers of Jumbo or Albert Heijn) and the ideas and experiences circulating in the spaces where our kitchens are operating, and where, despite everything, we still do find ourselves buying, from time to time, from the supermarkets.

For these reasons, we deem necessary to reflect together on ways to collectively refuse the existing and build new possible alternatives starting also from food.
All this implies in our opinion questioning what it means politically to choose which products to use in the kitchen, that is, considering how doing grocery is a political act, how all these choices can have an impact when they are situated inside collective processes, in this case, to build a network of relations between producers and consumers/cooks at a local level, creating communities of solidarity based not only on economic relations but on sharing political goals, and making it possible, for real, to give everyone access to a decent meal.
We would like to discuss on this and other ideas and try to think together on ways in which we can start creating alternatives through food.

This entry was posted in General. Bookmark the permalink.